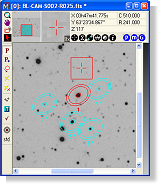 This brief describes some of the point source photometry capabilities of Mira MX x64 and Mira Pro x64. This tutorial steps through the basic functionality of the Aperture Photometry package as applied to multiple images in an "image set". This technique is sometimes also called "Serial Photometry" because the same object is measured in a series of images. This tutorial assumes you understand how to display an image and work with an image set. In this exercise we use observations of the minor planet Xanthippe to place limits on variations in its brightness over a short time period. In minor planet studies, these variations are used to characterize the rotation or tumbling of the body. The same methods could be used for analysis of variable stars, to search for stellar eclipses caused by extra-solar planets orbiting stars, or for other types of investigation. This Tutorial is taken the Mira User's Guide.